Scientists of the Joint Institute for High Temperatures (JIHT) of the Russian Academy of Sciences (RAS) have conducted a unique experiment that allows studying the emergence of quantum effects in our macrocosm in detail. By exposing grains of superconducting ceramic in a magnetic field in superfluid helium to laser radiation, the physicists observed an increase in the motion energy of grains and the formation of new complex structures — essentially, their evolution. Academician Oleg Fedorovich Petrov, Director of the JIHT RAS, has provided more details about the experiment and the role of quantum vortices in the relationship between microcosm and macrocosm.

Reference. Oleg Fedorovich Petrov is an Academician, Director of the JIHT RAS, Doctor of Physical and Mathematical Sciences, and an expert in experimental research of low-temperature plasma with colloidal particles (“dusty” plasma) and active colloidal systems in liquids and plasma. Author of more than 400 scientific papers published in leading scientific journals in Russia and the world.

― What characteristics should an object have to exhibit quantum properties?

― This question naturally arises whenever we talk about observation in a physical experiment. We study the world around us in two aspects. The first one is the world where we live, feel, and perceive, that is, the world of macroscopic objects and phenomena. The second one is the quantum world an important property of which is discreteness, or discontinuity: a quantum object can have discrete values of energy, momentum, and so on. How can we observe quantum phenomena on a macroscopic scale? Our compatriot, Nobel Prize winner Pyotr Leonidovich Kapitsa carried out a very interesting and important experiment in this field. It was an experiment to observe superfluidity in liquid helium at a temperature below 2.17 K (-271 °C), the so-called lambda point. At temperatures that low, helium becomes a quantum liquid with a unique property, superfluidity, which means it has near zero viscosity. This is a very unusual property not observed in normal liquids. Kapitsa's experiment is one of the first observations of quantum effects on a macroscopic scale.

― Is superfluidity found in nature or is this phenomenon only observable in the laboratory?

― This is an astrophysical question that goes beyond the scope of our research. However, out of curiosity, we have recently looked for an answer to this very question in scientific literature. It turns out that there is the so-called Boomerang Nebula in our galaxy, where the temperature can reach about 1 K (-272 °C). This is interesting, considering that the Universe is actually “warmer” overall. Thus, at least one place in our Universe has a temperature so low that superfluidity is possible there. As you know, the first observations of superfluid liquid helium were made in a laboratory. The Boomerang Nebula was discovered in the late 1970s, and superfluid helium — in the late 1930s. To achieve superfluidity, we should cool the substance to extremely low temperatures. In this case, the thermal motion of atoms and molecules becomes minimal, while its internal order and quantum effects become observable. Yes, we know that there are sufficiently cold places in the Universe, but so far there is no evidence that these places contain liquid helium, so a laboratory is still the optimal place to study superfluidity.

― Please tell us about the recent experiment at the JIHT RAS, where you observed quantum effects in the motion of active grains in superfluid helium for the first time.

― We have been moving towards this for about ten years. We used grains of high-temperature superconducting ceramics measuring about 40 microns (human hair thickness) as a material. We placed these grains in a magnetic field in superfluid liquid helium at a temperature below 2 K (-271 °C) and exposed them to laser radiation. The grains levitated kept by the external magnetic field. They were in motion in the superfluid liquid helium. The most surprising thing in this experiment was that when the heating laser power increased, the grain motion became more intense, which should not occur in superfluid liquid helium, where an unusually high heat transfer rate quickly negates the temperature rise making it hard to warm up the grains to a higher temperature. When the swarm of grains was heated by laser radiation, we observed the formation of more complex structures: the grains assembled into millimeter-long chains. Essentially, this was the evolution of structures, and the outflow of heat (entropy) necessary for such evolution was associated with an abnormally high heat transfer rate in superfluid helium. An increase in the intensity of laser radiation made the rate of evolution increase as well: the grains moved and formed new chains faster.

― So, if superfluid liquid helium is a quantum medium, the grains placed in it also become quantum, don't they?

Brownian motion is the random motion of small (a few micrometers or smaller) particles suspended in a liquid or gas. Source: The Great Russian Encyclopedia.

― No, Brownian grains do not become quantum, they are too big. When we talk about quantum phenomena, we mean a scale where discreteness can be observed. In this case, we cannot see a quantum object, but we are able to observe how it influences a macroscopic object (grains of superconducting ceramics), which our experiment has actually shown.

― If so, what acts as a quantum object that influences the movement of grains that is visible with the naked eye?

― These are quantum vortices. Their appearance is associated with the quantum nature of helium, and their concentration relates to the effect of laser radiation on the grain surface and the degree of heating of this surface. It turns out that the more intense the laser radiation is, the more quantum vortices emerge: the concentration of vortices increases and the grains move faster. These quantum vortices can be viewed as elastic filaments: they tend to get shorter. Each quantum vortex starts at a grain and ends either at the same grain or the border of helium and the environment. The grain is completely enveloped by such elastic threads. As a result, the symmetry breaks spontaneously, and uncompensated force is generated because one grain can have more vortices than another. Due to this influence, grains receive an uncompensated push and begin to move.

― Is helium the basis of such quantum vortices?

― Yes. Helium acts as the basis or substrate. At the same time, in today's understanding, the core of quantum vortices is hollow, that is, there is no helium there.

― It's quite hard to imagine.

― Imagine that a quantum vortex is a hollow thread. And that superfluid helium in a quantum vortex rotates around this hollow core. The velocity of helium atoms moving around the core varies from tens of meters per second near the vortex core to micrometers per second at the vortex periphery. Why is it called quantum? A quantum object, as I have already said, is discrete. If you swirl the superfluid component intensely and try to create vortices in it, the velocity circulation of this rotation will take only discrete values. A quantum vortex emerges. Here is an analogy from nature: a quantum vortex is like a tornado. Such vortices are consequential for the quantum nature of superfluid liquid helium. Their emergence can be indirectly observed in a laboratory, but these objects are extremely small. The core of such a vortex is about one angstrom in diameter, which is comparable to the size of an atom.

– The vortex is quantum but the grains remain classical, right?

– Yes, because they are large. Nevertheless, the grain motion that we observe is a manifestation of quantum effects. If we placed these very grains into a normal, classical liquid at the same temperature, they would remain almost stationary. We would be able to observe almost no motion because, at the temperature of the medium that low, the Brownian motion of the grains would be very insignificant.

― Then, according to quantum mechanics, the vortices you describe have no particular trajectories, but only a certain probability of being somewhere.

― Yes. And these quantum objects can be of great importance to our macrocosm. Many people are surely familiar with What Is Life? The Physical Aspect of the Living Cell by Erwin Schrödinger, one of the founders of quantum mechanics. In his book, Schrödinger tries to answer the question of whether a complex living object can be described in terms of thermodynamics. If it can, we seem to be dealing with the violation of the second principle of thermodynamics, that is, the law of entropy or measure of disorder. According to this law, when an isolated system moves from one state to another, it should, in theory, move towards disorder and increase entropy. However, in living systems, we actually see the opposite: entropy decreases in the process of evolution. Based on this, Erwin Schrödinger concluded that a living system manages to get rid of the entropy that appears as a result of its functioning. Schrödinger also offered an explanation related to the role of quantum effects and their scale. The quantum world is discrete and probabilistic: if we were quantum objects, we would be unable to do anything definitely, only with a certain degree of probability.

As to Brownian grains, we can see that they are macroscopic objects the motion of which is associated with the formation of quantum vortices. Our experiment suggests that quantum effects could drive evolution in the macrocosm. Having emerged, quantum vortices can become more complex and develop. When there are many such vortices, they intertwine and create the so-called vortex tangle or quantum turbulence. Such a tangle becomes more complicated and triggers the evolution of objects that we know as macroscopic, that is, large ones.

Our experiment has shown that it is possible to control the evolution of a swarm of grains in superfluid liquid helium. This makes it possible for us to approach such fundamental problems as the study of the emergence, development, and evolution of complex macroscopic objects of living and non-living nature, as well as the search for general physical laws and mechanisms of evolution, including the role of quantum effects.

The interview was conducted with the support of the Ministry of Science and Higher Education of the Russian Federation and RAS. 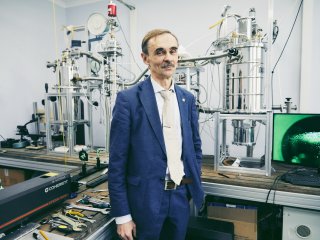 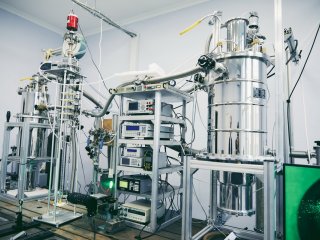 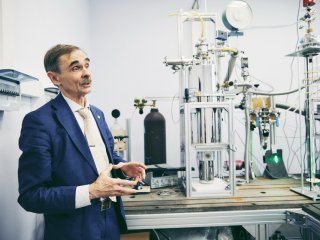 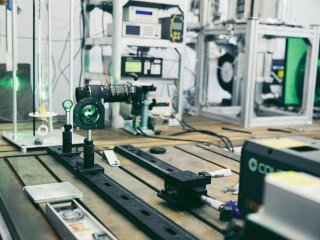 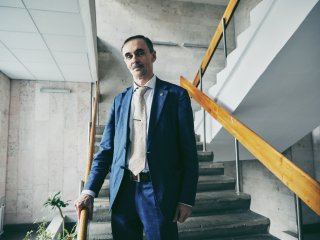 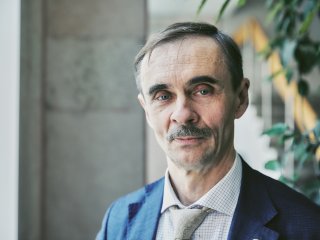 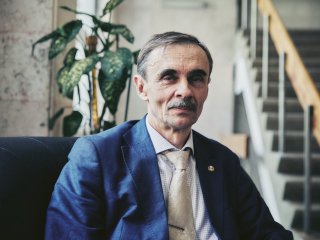 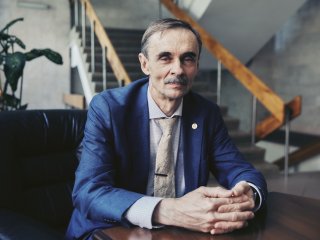 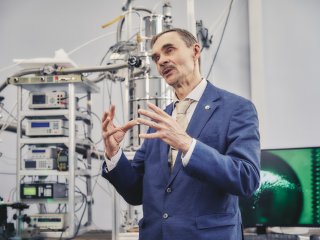 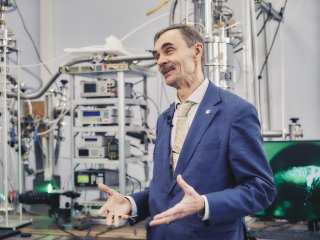 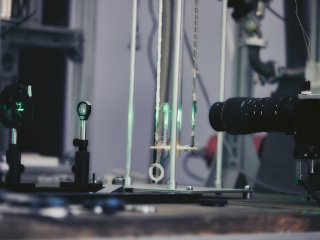 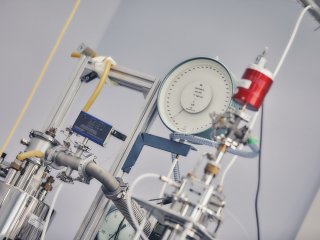 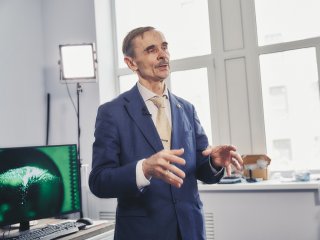 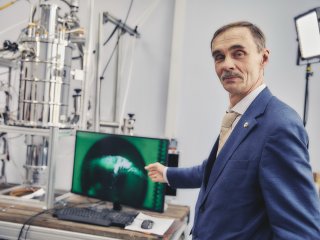 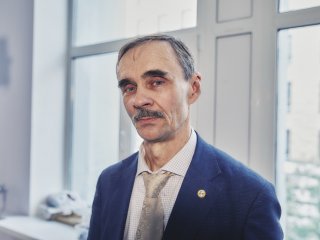 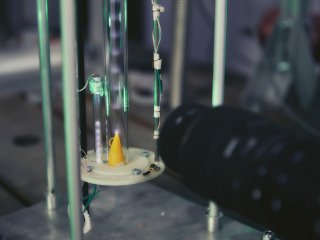 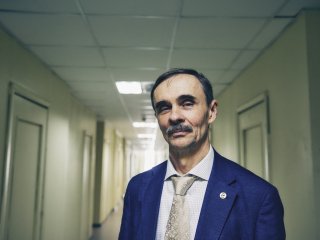 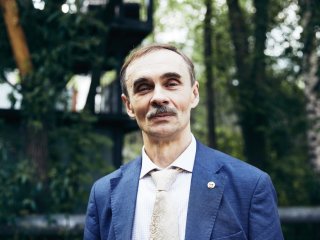 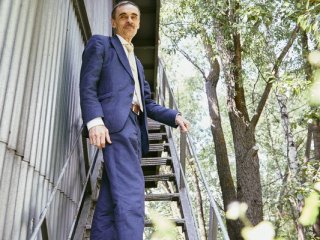 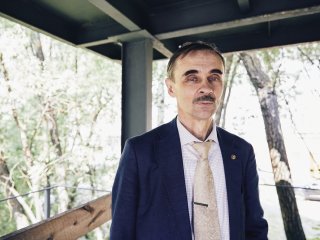 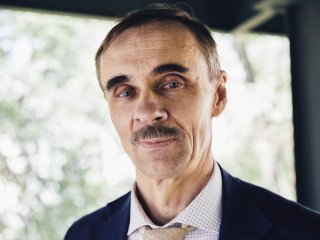 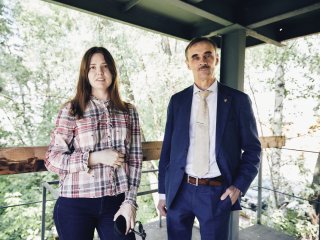 07.11.2022 10:30
138
“New chemical elements can no longer be found in nature,” Andrey Shevelkov, Corresponding Member of the Russian Academy of Sciences