The Incredible Diversity of Viruses. Interview with Corresponding Member of the Russian Academy of Sciences A. D. Zaberezhny

What role do viruses play in our evolution, how do they spread, and what interesting features do they have? Aleksey Dmitrievich Zaberezhny, RAS Corresponding Member, Head of the All-Russia Scientific Research and Technological Institute of Biological Industry (VNITIBP), answers these questions.

— In one of your interviews, you mentioned that there remained a lot of unexplored viruses on our planet and most of them come from the global ocean. Please tell me about that in more detail.

— Viruses are part of our biosphere. They do not come from outer space, but are part of our biological habitat and, by the way, are the most important evolution factor. There are several hypotheses about the origins of viruses. The first one claims that they are degraded unicellular organisms, the second one – that they are a pre-cellular form of existence, while the third hypothesis suggests that viruses are migrating elements of the genome that have traveled a long evolutionary path. In our work, we very often see them as various transposons. Migrating elements arise from pre-existing genomes, they can develop an ability to autonomously replicate outside the chromosome, and then they evolve into viruses over millions of years.

As for the aquatic environment, the largest part of the biomass on our planet is concentrated in the ocean. However, as we know, the virus is an intracellular parasite, i.e. it needs to develop inside a living cell. And where can we find the largest number of living cells on our planet? Not on land, but in water. If we take the unicellular inhabitants of the global ocean, place them on one scale and then place all other animals living on the Earth on the other scale, the underwater inhabitants will still outweigh. Water gives viruses wider opportunities. According to one of the hypotheses, viruses emerge from the marine environment and start to circulate on land. As we know, the terrestrial environment is also full of life, so viruses can form and be transmitted among terrestrial living beings.

— How were viruses first transmitted from animals to humans?

— It’s hard to say for sure, as you are asking questions about events that took place millions of years ago. However, we definitely know that viruses mutate, which has a direct connection with your question. Every time it reproduces, the original virus ceases to exist, so its “children” replace it in the reproductive process. Each of these “descendants” contains mutations. Thus, when a virus multiplies, it will never be the same again. These mutations are also passed on to “offsprings” during further multiplication, so the virus is a constantly changing matter. However, we shouldn’t neglect the strong factor of natural selection. If a mutation does not provide a virus with a competitive advantage during multiplication, the virus with such mutation cannot dominate in life. However, a virus with a mutation of competitive advantage will be displacing others and dominating. Viruses change, and when analyzing the structures of these viruses, including archived ones, computer programs can make far-reaching conclusions about the origins of a particular virus. There is such a notion as “evolutionary clock”: it can give an approximate estimate of the years when one virus diverged from another.

Most viruses we know:

— One viral particle can give rise to 20,000 offsprings. Do we know the mechanisms of such rapid multiplication?

— Viruses with high ability to multiply were discovered quite recently: about a decade ago. They reproduce inside unicellular organisms in aquatic environment. The thing is that when a virus leaves a cell, or when a cell releases it, the virus must infect the next cell. If it takes place in dense tissues, then such a virus does not need to give a lot of offsprings, as the resulting new virus quickly and easily finds a cell that it can infect. However, if we are talking about unicellular organisms found somewhere in a pond, it means that a virus that has come from one cell sees only water around it, so it needs to meet another cell to infect it. Therefore, these viruses have developed an ability to multiply in such large quantities.

— So, there is no mystery about it?

— On the one hand, such high ability to multiply for these viruses is not surprising, but, on the other hand, it still remains kind of a mystery for us: to reproduce its own structure, a virus has to fully process all the substance of the living cell where it parasitizes. However, to create absolutely different structures necessary to assemble viral particles from specific organic structures, this virus has to launch a lot of biochemical chains. It is still unclear how a virus can take a set of initial cell structures and use them to produce such a huge number of new components which form a virus. It is necessary to eat up this cell to create so many viruses. I believe that studying these mechanisms is an interesting task for biochemists.

— Is the question about whether viruses are living organisms or not still relevant?

— I think that this is a burning issue today mostly due to the fact that people have learned to synthesize viruses in vitro. Thus, if we synthesize a virus, then we have to decide whether this virus is a living organism or not. If this virus is a living organism and you synthesize it, then you assume the functions of the Creator – you are actually creating a living being. Some people are not ready to accept this fact. However, we do not consider viruses to be living organisms at the moment. For example, we do not say that they are growing. Instead, we say that the virus is active, that it is contagious, that it replicates, i.e. multiplies.

— Of course, it is a sign of life, but multiplication should take place in inanimate nature. For example, no virus can multiply in a pond or soup. It can only reproduce inside a cell, and, for multiplication, it has to use cellular mechanisms, as well as substances created by the cell. Therefore, the virus rather acts as an unwanted organ of this cell that has entered it from the outside and made it obey its program. We cannot say that the virus is a living organism, as no virus can live outside another living organism, such as a living cell.

— What is the influence of veterinary virology on medical virology and vice versa?

— Virology is a single science, regardless of whether we mean plants, animals, or human beings. Veterinary and medical virology have common fundamental principles, so virologists do collaborate. Of course, the very object of our study, i.e. viruses, can be absolutely different. For example, a virus with an encoding genome and that with a non-encoding genome differ so much in their “philosophy” that the virologists who study them do not even communicate nor do they attend the same conferences. They are like two zoologists one of whom studies elephants and the other studies sparrows. Besides, viruses with encoding and non-encoding genomes differ much more significantly than elephants and sparrows. Elephants and sparrows at least have similar genes, but these viruses are absolutely different.

Viruses that have an encoding genome need little to reproduce: this genome is self-sufficient, it acts as a design drawing of the entire viral structure. However, a virus with a non-encoding genome has to turn it into an encoding genome inside a cell: it carries an important mission that is irrelevant to the other class of viruses.

It is a very rare situation when a person who has devoted half of their life to studying one group of viruses suddenly switches to another group. I have a story to tell you about my two acquaintances. They were a married couple. He was dealing with so-called negative-stranded RNA viruses, i.e. viruses with a non-encoding genome, and she was studying those with an encoding genome. Their marriage didn’t last long.

— Who would have thought!

— Well, few surprises there since they were dealing with two absolutely different objects.

In general, medical and veterinary virologists most often find points of contact when it comes to anthropozoonoses – diseases that have the same pathogen for humans and animals (for example, rabies), as well as when they study closely related viruses that are like twin brothers, even though they may have different hosts in humans and animals. For example, they comprise the causative agents of measles in humans and plague in carnivores (distemper). Here, virologists do not divide into physicians or veterinarians.

—Absolutely. The thing is that viruses are at the very bottom of the trophic pyramid, they regulate the population of organisms on the Earth. If some animals, plants or unicellular organisms multiply too intensely on our planet, the virus becomes more active to regulate their population. If there were no viruses among unicellular organisms, then everything would have become moldy and turn into kind of jelly.

— Do you mean the global ocean?

— Yes, I mean our ocean where, as we have already mentioned, viruses are circulating very actively. By restraining the growth in the biological mass of unicellular organisms, they turn into one of the most powerful food pyramid regulators. It is noteworthy that there even exist virophages – viruses circulating inside other viruses. This is a very recent discovery – the so-called mavirus that, by the way, has a transposon present in every human body. It turns out that the lowest form of life, i.e. the virus, and its highest form, i.e. the human being, have something in common – one genetic element. Thus, the evolutionary relationship between viruses and humans is indubitable.

Evolution comprises a huge number of things. We are constantly multiplying, while copying our genetic material, but these copies are not replicas at all. If they were replicas, then all of us would be the same from birth, but the situation is different: these copies are inaccurate, especially when it comes to viruses. Depending on its “ideology,” “philosophy,” history, each virus has a different copying accuracy setting during replication. Some viruses copy themselves very inaccurately, carelessly. For example, the porcine reproductive and respiratory syndrome virus, influenza virus, etc. However, there are also viruses that copy themselves quite accurately. In their turn, human beings also copy themselves inaccurately, and so we have various pathologies, mutations, etc. This is our evolution. It occurs mainly because our genetic material copying mechanisms are inherently careless.

— In the end, please tell me about the work of your institute

—  I have been the head of VNITIBP for a quite short time – since late 2020. VNITIBP is a prominent institute, it deals with applied biotechnology, designs processes for biologicals production, and then scales them up. We have transferred to the neighboring Schelkovo-based biofactory quite many production processes and techniques developed here (for example, the production of vaccines). Today, these techniques are being successfully developed to the benefit of our country. The focus of our studies are antimicrobial resistance, development of diagnostic test systems, various feed supplements, etc. We have a lot of interesting scientific programs. For example, we have a laboratory to monitor the environment with the help of living organisms. We’d also like to continue developing virology in the future. Thus, we still have a lot of work to do. 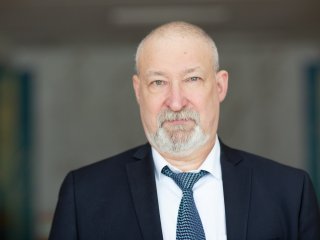 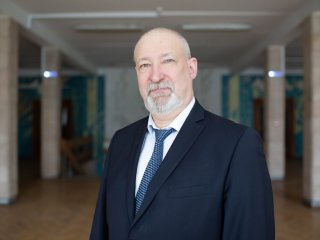 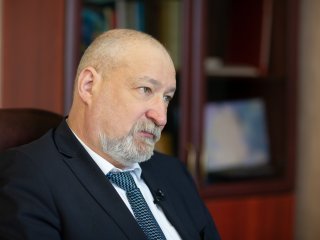 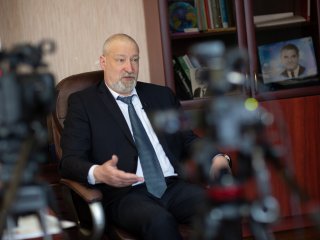 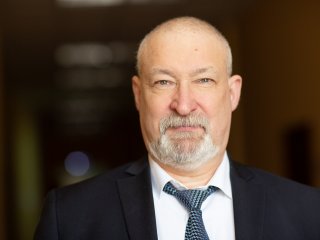 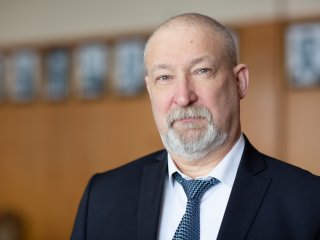 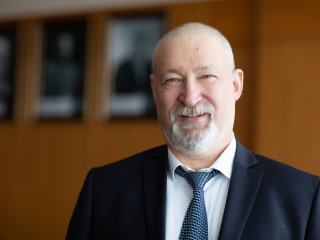 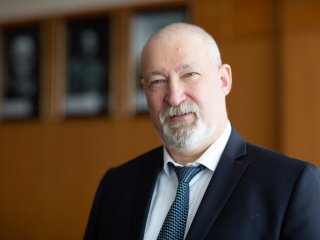 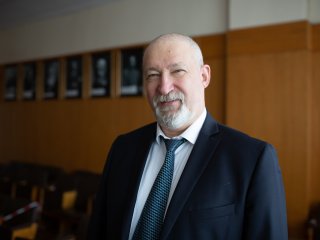 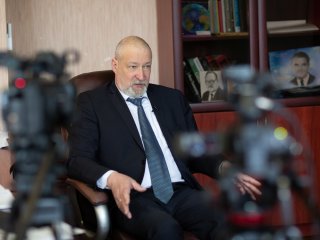 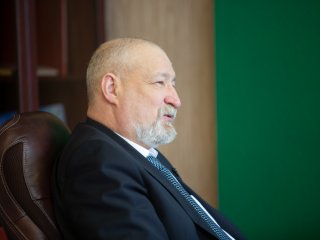 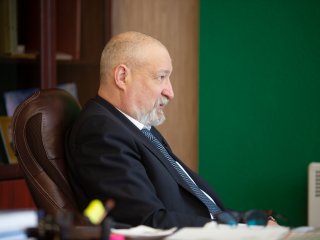 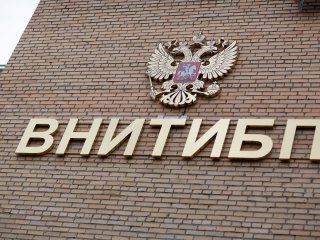 17.06.2022 15:05
140
The Most Powerful Accelerators in the Universe. Academician Valery Rubakov on Blazars, Neutrinos and the Neutrinos and Particle Astrophysics Project