On Development of Fire Prevention System. Interview with Denis Kasymov

The wildfire situation around the world is still raging. Every year there are more and more wildfires in forest areas. There are many reasons for this global problem. A lit cigarette, a match, a campfire; a thrown-out glass bottle, which can serve as a lens; burning old grass, various kinds of garbage near the forest. We should not exclude intentional arson, which in most cases is recognized as the main culprit of the accident. How should we fight fires correctly? And is it really possible to reduce their number? Denis Petrovich Kasymov, Candidate of Physical and Mathematical Sciences, head of the laboratory of the Faculty of Mechanics and Mathematics at Tomsk State University, senior researcher at the Laboratory for Atmospheric Prediction of the Institute of Atmospheric Optics, Siberian Branch of the Russian Academy of Sciences, discussed these issues with Scientific Russia.

- Fires are one of the global environmental problems. Which fires are considered the most dangerous? In which regions are they most common?

- This is a very important issue indeed. Despite the development of science and modern methods and technologies for extinguishing fires, statistics show that the number of fires is increasing significantly. We are witnessing a trend of positive fire frequency. Climatic factors related to climate change and the desire of people to develop private housing are converging here. In this regard, the concept of wildfire can be expanded to the concept of natural fires, namely fires in naturally-urbanized areas, when the fire moves from the forest area and threatens human health and life.

In addition, we have begun to more often observe the emergence of large fires in the areas where they were not previously registered. These are Bolivia, Scotland, and Chile.

Concerning the question of the most dangerous type of fire. Here we have to define what we mean by danger. This is the so-called fire intensity. The scientific community nowadays has such a term – megafires. Australia, 2020. Terrifying fires in terms of their size and carbon emissions. The burning was observed over an area of about 500 thousand hectares. The enormous height of the flames and the speed of their spread became the most dangerous for the country and all life in it. Such fires are certainly registered. Fortunately, there are not many of them, but they do exist.

The most common classification of fires: ground fire, crown fire, peat fire, and steppe fire. In this case, the most dangerous fire is considered a ground-crown fire – when burning takes place both on the ground level and in the crowns. It can be rapidly spread by leaps and bounds and can advance by means of the outer layers of the atmosphere and strong gusts of wind. If we are talking about a ground wildfire, its spread speed is low and it is easier to put out. And a ground-crown fire is the most dangerous.

What are the dangers of megafires? First of all, we know less about them scientifically. Second, these large seats of fire are the ones that provoke all sorts of damaging effects. For example, the generation of particle transfer. This is also an important aspect. We are working on this. Particles, for example, which were formed in a fire in Australia, can travel to distances of several tens of kilometers, and initiate a new seat of fire there. In addition to particle formation, fire whirlwinds and dry thunderstorms, also resulting from large-scale fires, are quite common.

- And how can we foresee such megafires?

- The key to a successful fire suppression is the possibility to predict fires and somehow prevent the appearance of a powerful seat of fire. A fire cannot break out suddenly. It is created by a number of factors, such as the correlation of climatic indicators and the lack of rainfalls for a long time. If we're talking about the fact that we need to anticipate the occurrence of a fire, what are some possible ways? In the basic case, we need ground towers, networks of cameras equipped with infrared sensors and infrared cameras capable of fixing a certain thermal spot that has a seat of fire at a sufficiently long distance. Next, a very important and effective method related to remote sensing is satellite monitoring. Based on satellite imagery, we can locate thermal points.

The current state of aerospace monitoring has a number of critical points. This is the focus of scientific groups associated with the correction of satellite data, i.e., are engaged in the interpretation of data obtained from satellites. The basic methods of extinguishing are ground monitoring, satellite monitoring, and aerial patrolling for fire identification. The main point is to prevent the emergence and development of a fire as early as possible.

The smoldering particles generation is an effect that is already observed during a fire, a pretty large one. In this case, it is important to predict how these particles will behave, how far they can travel, and what their ignition potential is.

Over the past 10 years, scientists of the global scientific community have been actively investigating three main stages: particle generation, transfer, their transportation and landing, as well as their interaction with the soil or other surfaces.

- Is it possible to reduce the number of fires today?

- You can't put out all the fires. It's only natural for our nature. It is possible to reduce their number. It is impossible to do with scientific developments alone. So, it is important to increase people's environmental responsibility by means of vocational activities.

One of the annual disasters for Russia, for the southern regions of Siberia and the Far Eastern District namely, is spring fires. Uncontrolled fires and people's ignorance affect the development of fire situations. For example, the situation in Khakassia in 2015. In just a few hours hundreds of houses were covered in flames, and within two days several thousand houses burned down, people were killed.

An important point is controlled burnings. This method is implemented in practice, but here we must be very careful, too. We knowingly reduce the fuel load in the forest area in those places that are most likely to have the highest fire danger.

- What kind of developments in fire prevention is your laboratory engaged in?

- Our team deals with medium-scale fires. This research is carried out as part of a grant of the Russian Science Foundation within the frame of the Presidential program.

We conduct research on the emergence and spread of field fires, as well as study methods and technologies of their detection at the experimental range. We study burning processes, as well as gases and aerosols that are emitted by fires. During intense combustion, gaseous condensed combustion products are released. Certain gases and aerosols that are typical of a natural fire. They can be captured with special equipment and we can judge by the marker gases in which sector the fire is located. We focus on studying and searching for out-of-horizon fires here. We can't see the seat of fire, but we can analyze the fire using marker gases. This is the technology of a complex fire detection system. Recently, we have received a patent for it. We are not offering a full fire detection cycle, just a framework scheme. It can be upgraded with monitoring stations, but its principle is something we are working on. This is one part of it.

In addition, we carry out a study of burning and smoldering particles produced by fire. This interesting interdisciplinary project is based on the development of a software package that allows us to detect and analyze the behavior of burning and smoldering particles on a thermal image. It becomes possible to determine thermophysical characteristics important in terms of the fire safety of such particles, namely: their trajectory, temperature, the amount of heat generated by the particles. Knowing all these characteristics, it is possible to quickly analyze fires of different intensity.

This project includes software on one side such as programming, using computer vision algorithms and convolutional neural networks; and fire experiments on the other side.

Since 2015, together with the Institute of Atmospheric Optics SB RAS, we have developed and designed Fire Dragon – “Generator of burning and smoldering particles.”

As a result, the software package that we are developing is aimed at obtaining the thermophysical characteristics of the stream of burning and smoldering particles. It includes all sorts of algorithms that detect hundreds of particles that change their location on the frame. On the one hand, we need to develop a detector – a subprogram that catches the particles. On the other hand, we need to develop a special tracker that guides these particles from frame to frame, gives them a unique number, and calculates their trajectory.

From 2019 to 2021, I supervised the implementation of a grant from the Russian Science Foundation. The project was aimed at applying infrared technology to develop methods for controlling the thermal insulation properties, thermal insulating ability of various structural materials. This is how we can remotely analyze the behavior of different kinds of materials in any fire scenario. Here we expand the boundaries and simulate some real cases of fires of different types.

- What are the most effective ways to fight peat fires?

- This is a very tricky and complex object of study. Peat is a porous material. The specifics and complexity of combating fires in it lies in the appearance of spontaneous ignition mode. The peat self-ignition temperature starts already from 60-65 degrees Celsius.

When extinguishing a peat fire, an ideal scenario is to properly work out the extinguishing process itself. This is a multistage process. It is necessary to detect the seat of a peat fire, determine the main zone of combustion. It can be in flame or smoldering mode. Peat fires are characterized by smoldering combustion mode. It is important to work very carefully with forest firefighting equipment, as cavities may form in the peat fire zone.

How do we put out such fires? The methods are different, it all depends on its degree. At the initial stage we use the method of digging up and mixing with water, it is obligatory. If there is a body of water nearby, we water the seat of combustion. After this, we measure the peat layer temperature. According to the regulations, it should not exceed 40-45 degrees. Otherwise, the burning will resume. It happens quite often: the fire was extinguished, but the seat of fire was not. Peat fires can burn for years.

- How do you use a controlled burning to put out fires?

- Controlled burning is one of the firefighting types. We organize a burning lane exactly near the boundary of the fire front that we need to extinguish. Based on the physical processes going on in the combustion zone, air suction occurs. At some point they will merge into a single front. It is important to control meteorological parameters here – to track the wind direction and speed, so as not to aggravate and arrange an additional seat of fire. It happens that the controlled burning is initiated in several lanes. Special drop incendiary devices are used. As a rule, the controlled burning is implemented in an open area with air support when helicopters can follow the course of the burning. Such a method is very effective in extinguishing fires. 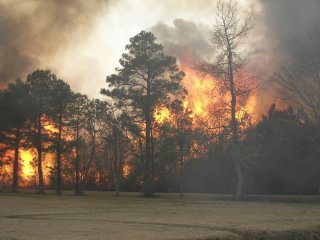 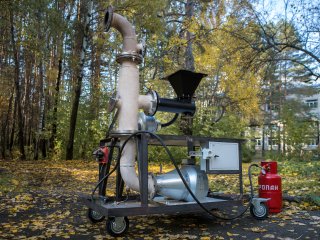 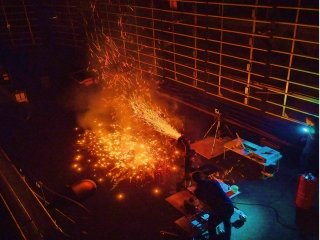 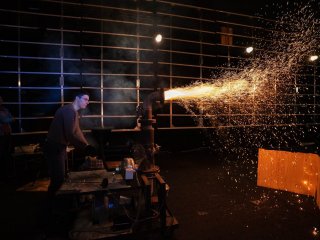 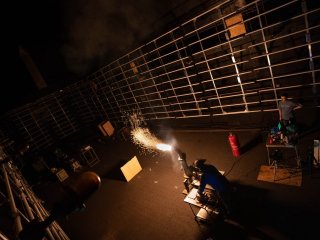 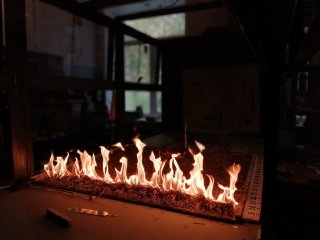 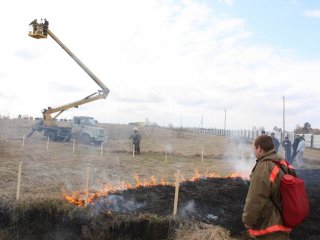 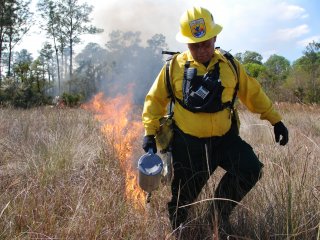 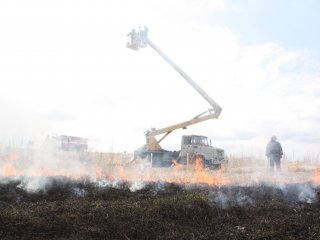 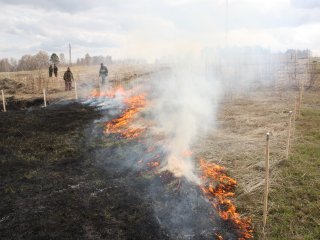 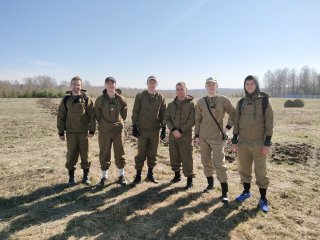