Medicine from Your Own Bacteria

When someone is said to have a rich inner world, this usually means that the person is well-read, has rich life experience, and is able to see multiple aspects of various life situations. Specialists of Microbiome, a unique Russian laboratory, a business entity cooperating with the institute under a public-private partnership and based on the premises of the Institute of Experimental Medicine (IEM) − suggest that we look at this expression from a different angle, i.e., take it literally…

We often fail to notice changes in our health. The pace of life today does not leave people time for taking care of their health; they do not see a GP unless there is some pain already, and no one thinks of prevention. Sleep debt, stress, skin and digestion problems are becoming habitual and inevitable. What could be done about it? The Microbiome lab specialists are convinced that our health heavily depends on the state of our own microbiota – the very “rich inner world” a human has.

Remember that human microbiota includes all microorganisms (bacteria, fungi, archaea, protozoa and viruses) that live in the human body. It is hundreds of billions of microorganisms coexisting harmoniously with our own cells. Therefore, the restoration of the body’s natural processes should start with mobilizing the person’s own resources or, simply speaking, with engaging bacteria that are present in the body and have formed the functions necessary for productive symbiosis.

“We are creating formulations based on microorganisms specific to a particular person,” Aleksandr Suvorov, Chief Scientific Consultant of the Microbiome Center, a Correspondent Member of the Russian Academy of Sciences, told our publication. The method essence is simple. First of all, the lab specialists perform a genetic analysis of the patient. The thing is that sometimes disease is caused by death or weakening of our own beneficial flora rather than by pathogenic bacteria. Destruction of most human bacteria leads to the excessive growth of opportunistic bacteria strains that show their pathogenic properties in case of dysbiosis. Being non-pathogenic, they are harder to detect. Which is why it is so important to investigate the genetic specifics of the population.

“Our main objective is to restore human microecology,” Suvorov emphasized. “Bacteriologists at the primary genetic analysis lab isolate the patient’s personal bacterial clones and perform preliminary analysis of strains as a basis for further research. This is most important in terms of microflora restoration, especially after a serious stressor such as antibiotics. Very few people, even among the youth, have never experienced any problems with the gastrointestinal tract following a course of antibiotics. This happens because antibiotics kill some of our own beneficial bacteria along with pathogens. Moreover, stress, e.g., drastic dietary changes when traveling, disrupts microbiocoenosis in various parts of the body, primarily in the gastrointestinal tract. Such things may pass without consequences, but sometimes they lead to a chronic disease or even an oncological pathology. These are the issues that our center is dealing with. When we take normal probiotics, we cannot be 100% sure which “enemies” in our bodies they are going to attack. In addition, there is scientific literature describing some cases when probiotics even caused substantial harm to the patient’s health”.

“In our case, the formulation is created using only the microorganisms to which your own body, especially your complex immune system, is adapted and to which it has the so-called microbial tolerance”.

After the primary genetic analysis, the specialists proceed to a detailed genetic analysis of bacteria strains, which are seen as autoprobiotics − products that only contain carefully selected bacteria with positive functions. In this case, polymerase chain reaction (PCR) equipment is used. The method makes it possible to investigate the structure of each patient’s microbiocoenosis, and test potentially promising strains for genes that might have pathogenic factors. Thus, the staff of the Microbiome lab produce a “genetic passport” of a microorganism being investigated as a possible autoprobiotic.

The issue of biological material preservation, be it microbiota components or body cells, has always been an especially acute one. The Microbiome lab has a biobank with advanced cryogenic storage spaces. The temperature in the biobank is always stable. It is a fully isolated space, where each piece of biomaterial receives its own number and label. In simpler terms, the laboratory specialists store your data and biomaterial in the biobank after your first visit, so when you come there a second time, a new batch of personalized formulations will be dispensed to you immediately.

“The microbiota changes a little over time, of course, but the strains remain the same. The quantities of particular microorganisms, e.g., lactobacilli, enterococci, or bifidus bacteria may be different. All in all, it takes three years to build genetic immunity. After that, the immune system is able to distinguish between its own microorganisms and those coming from the environment,” Aleksandr Suvorov mentioned. Why do children pick up dirty things, stick their fingers everywhere to then stick them into their mouths? This is a kind of a biological law, allowing a young person to get acquainted with a huge number of various microorganisms and train their microbial system. It is known that all kinds of allergies and skin conditions are largely caused by being raised in an excessively clean environment and ending up with an untrained immune system. Therefore, finding a healthy balance is important. The concept is changing as we speak, moving from the focus on “universal sterility” towards understanding the need to maintain the internal ecology of a human body.”

The Center specialists are developing their activities in oncology as well as microflora restoration and prophylaxis. “The research goal is to optimize the approaches to microbiota restoration in cancer patients. It is clear that any surgical intervention is a serious challenge to the patient’s health. Therefore, by creating a special formulation for one’s post-operative rehabilitation period, we lower the probability of the cancer patient's microbiocoenosis being adversely affected. We are also focused on basic research on the use of microorganisms that have a direct anti-tumor effect.”

Aleksandr Soms, Director of the Microbiome Center, pointed out that the center staff continued delving into the bacterial microcosmos. “We are promoting microbial therapy technique. It is a new topic for physicians. Therefore, in addition to creating products in the form of a starter or capsules, we are trying to tell physicians about the technique, i.e., train them.”

The Microbiome laboratory was created by the Institute of Experimental Medicine (Saint Petersburg), an organization with a long history. This is where the world’s first polio vaccine and live influenza vaccine were created. Plague patients were treated with medications created by the IEM in the early 20th century. There are documents in the archives of the IEM Museum that tell the story of the IEM Special Laboratory for Production of Anti-Plague Medications created at the turn of the century. It is known as the Plague Fort (Alexander I Fort located on an artificial island in the Gulf of Finland), where 20 epidemiologists risked their lives to create a plague vaccine.

Many years later, the Institute remains at the forefront of medicine. The new COVID-19 pandemic is bringing new complex tasks before the IEM. For instance, the Institute specialists are developing a COVID-19 vaccine in the form of a fermented milk product. The IEM researchers are using a probiotic enterococcus strain that lives in any mammal. Thus, the coronavirus gene is introduced directly into the bacterium chromosome making the structure more stable. This gives it notable advantages. The vaccine is at the pre-clinical trial stage. “The institute is unique thanks to its multidisciplinary approach. Some people see it as a weakness,” says Aleksandr Dmitriev, Director of the IEM, a Correspondent Member of the Russian Academy of Sciences. “But I think that it’s our strength. We have hundreds of employees, working on many different projects: in the biochemistry of atherosclerosis, genetic disease, infectious pathology, neurodegenerative disease and multiple other areas. And we are not going to move away from the historical traditions that formed over 130 years. The IEM is a patchwork quilt. It consists of multiple bright-colored pieces we are and will be proud of.” 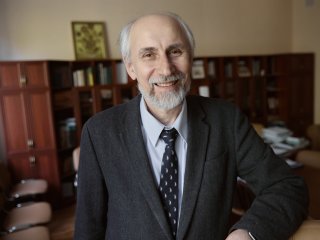 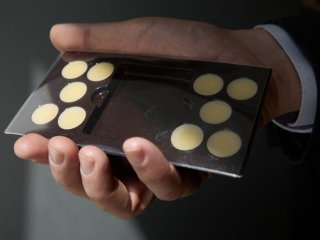 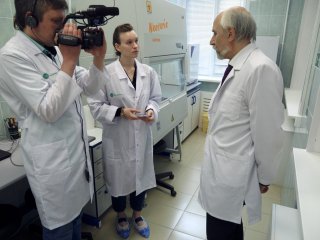 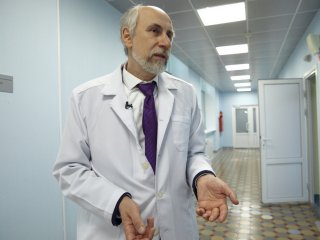 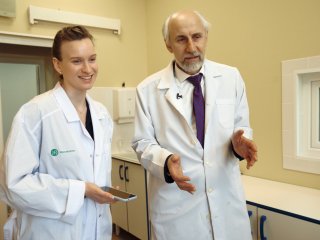 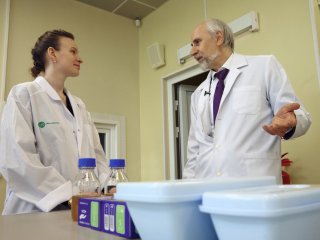 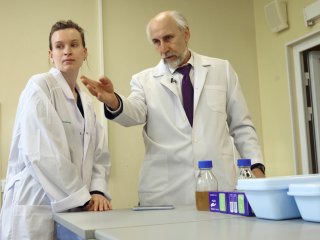 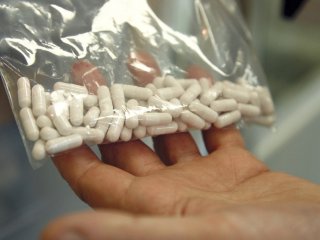 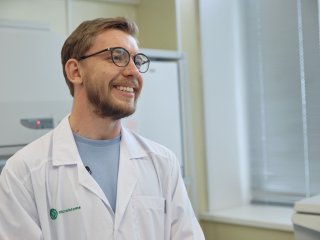 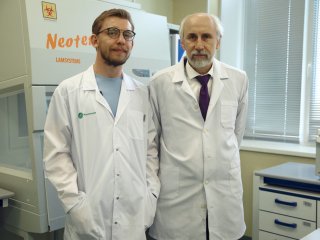 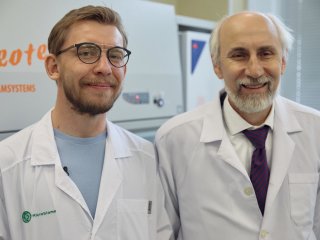 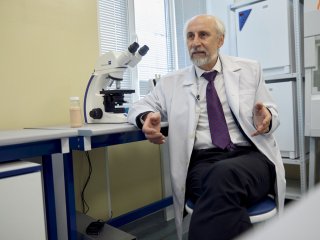 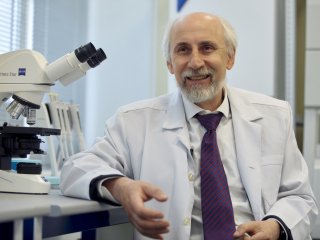 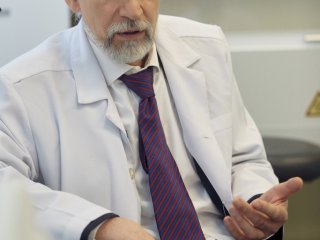