How many meters are under your feet? Less than one if the log was thrown over a puddle, a couple dozen from the concrete flooring to the asphalt on the overpass, or more than 500 meters to the river at the gorge bottom, as on the Duge Bridge – the highest bridge in the world. We calmly walk or drive over bridges, trust structures and technologies. After all, the bridge is one of the most ancient structures. These or those analogs are mentioned in almost every culture that has left a written or pictorial legacy.

Our article will talk about how bridges are being built today, what materials and technologies are used when constructing multi-thousand-ton, kilometer-long spans over ravines, rivers, or roads.

Many modern bridge-building technologies are based on an invention of the first half of the 20th century. The creators of prestressed concrete are French engineer Eugène Freyssinet and Soviet scientist Viktor Mikhailov.

The technology is based on the propensity of materials to resist tensile stress. Reinforcement is laid at the place where the prestressed reinforced concrete element is created. It can be both metal wire and metal threads. The reinforcement is stretched as much as possible, almost to the point of rupture. In this state, it is poured with concrete and remains stretched all the time until the concrete finally petrifies. After the material has become solid, the reinforcement is released from tension. Bound by concrete, it transmits to it the released tension force, the concrete becomes actually compressed and receives a compacted structure.

It is from the blocks of prestressed concrete that the Motherland statue was built on Mamayev Kurgan in Volgograd. Such a material shows two to three times higher resistance to cracking.

Wood and concrete remain the traditional materials for the construction of bridges. But they have recently been losing ground to new solutions. Bridges made of polymer composite materials appear more and more often. They are more resistant to corrosion, temperature changes, and the effects of aggressive environments, while they are lighter than analogs made of iron and concrete.

For manufacturing bridges made of composite materials, the method of vacuum infusion is used. During such an infusion resin is injected into the laminate under pressure. Thus, fiberglass and carbon fiber parts are prepared, which can reach several dozens of meters in length and width. The dry raw material of the future composite is laid out in the tooling, a vacuum is created, due to which the binder is drawn in and impregnates the reinforcing material.

Manufacturers say that bridges made of composite materials are more durable than their analogs, while cheaper and more resistant to vandalism and destruction. And technologies allow one to make separate spans entirely, without the need for bolted connections and welding.

The bridge starts with a project. However, like for any other engineering structure, it is necessary to calculate the cost, create a drawing, analyze the risks and durability. In recent years, modern has come to the aid of designers; this software helps evaluate a promising design, construction progress, and possible complications in a single model.

BIM is an abbreviation of Building Information Model. With the help of BIM technologies, the bridge construction begins not with drawings, but with a full-fledged three-dimensional model of the future structure. At the same time, the model connects all elements with related information, up to the prices of building materials. The bridge designed with the help of BIM technologies is a single whole in the computer space; changing any parameter affects changes in the project as a whole, up to visualization, drawings, and planned work deadlines.

BIM technologies are not just about bridges. Computer modeling makes it possible to work comprehensively with any construction objects, and preliminary planning of the entire structure reduces one’s economic and technological risks.

In 2020, some engineers at the Vienna University of Technology proposed a solution that should speed up the process of building bridges. This is a structure that unfolds to the sides like an umbrella. Hollow beams, mounted almost vertically on a support, move apart until they stand horizontally. Then they are filled with concrete, forming the supporting structure of the bridge. The developers say that their design can be installed in a few days and unfolded within three hours.

The London area of Paddington saw the installation of an unusual bridge, which, if necessary, gives way for boats to pass through the canal – large vessels simply will not pass there. The bridge is madwhich are hydraulically folded into an octagon.e of triangular sections,

The X-shaped, 138-meter support of the Octavio Frias de Oliveira Bridge in São Paulo, Brazil, is one of the local attractions. This is the only cable-stayed bridge in the world with a support of this shape. Every day, up to 5 thousand cars per hour cross it during peak hours.

The two-thousand-rubles bill depicts a bridge to the Russky Island. This is an indicator that engineering structures become architectural monuments and have aesthetic significance. And not due to their external decorations and design solutions, but precisely because of the engineering specifics of their structure. 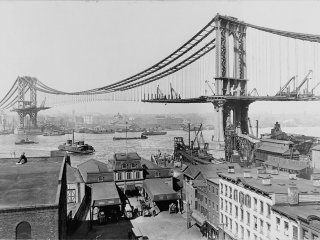 The history of bridge construction is not frozen in time and space. It is developing: new solutions, increased safety, and building records in height and length. Today we will speak about the “connectors” that are so necessary for people