As we know, polymers are complex substances that consist of long repeating molecular units. Depending on the structure and the problems solved when using polymers, they have different physical properties. Some polymers stretch easily and have high elasticity. Others, on the contrary, are remarkably hard. But it’s not just about artificially created materials. Proteins, polysaccharides, which make up the DNA and RNA chains, are also considered polymers. “Even humans, in a certain sense, are walking polymers,” says a young scientist Mikhail Soldatov in his interview. For several years, Soldatov had worked with Chinese colleagues on porous polymers that can be used to purify water and air. Read more in our interview.

Mikhail Alexandrovich Soldatov is the Chief Specialist of the Department of Scientific and Technological Projects at the Mendeleev University of Chemical Technology of Russia, Senior Researcher, Candidate of Chemical Sciences.

− Polymer materials are known to many. And, in principle, everyone is already used to the fact that they surround us everywhere. But, nevertheless, let’s define once again what they are.

− As the song of the Splean band goes, “Everything in the world is made of plastic and there’s plastic life around.” Indeed, polymers surround us everywhere, and even humans, in a certain sense, are walking polymers. In general, we are talking about any long molecules, which are sometimes called macromolecules or high-molecular compounds. Polymers consist of certain, usually repeating chains. That’s why they are so long.

In addition to this characteristic, polymers have another unique property − elasticity. This property is inherent solely to polymeric substances. Plus, due to their high molecular weight, polymers cannot be converted to a gaseous state: when heated, the polymer simply collapses before the expected boiling point.

− Where are polymers used nowadays?

− Everywhere. All the varnish coats are polymers. Everything that surrounds us, all the equipment is covered with plastic polymer. They can be found even in the production of paper because it’s cellulose. And cellulose is a natural polymer. All DNA, RNA, and proteins are also different kinds of polymers.

Therefore, polymers are not only polyethylene or plastic. Now they are actively used in the automotive industry, they are being introduced into the field of aircraft construction. After all, they’re cheaper and lighter than metal.

− On the other hand, we are constantly fighting with this plastic. And at the same time, we are increasing its production. Isn’t there a contradiction here?

− This is a question of cost and high functionality. Today, it is often cheaper to get something from plastic, and then spend money on its processing, than to create something from expensive metal. In addition, scientists are conducting research aimed at creating biodegradable types of plastic. As a graduate student, I learned that Toyota, for example, was very interested in the production of car bumpers made of decomposable plastic. Therefore, today this is a very promising direction, including in the science of polymers.

− Could you tell us about the specifics of porous polymers? How are they used?

So, our Chinese colleagues are focused on the use of porous polymers for water purification. In general, one of the main problems in China is the lack of high-quality water. Let me remind you that their primary sources of water are two major rivers – the Yangtze and the Yellow Rivers – and the sea with saltwater. Therefore, freshwater must somehow be accumulated and generated.

One of the projects was related to wastewater treatment – with the adsorption of heavy metals, dyes, and other elements harmful to humans that enter the water from production facilities. In turn, I developed adsorbents based on certain monomeric compounds, known as “building blocks.” With the help of certain reactions, we literally assembled these building blocks, or cubes, in such a way that a small cavity was formed, i.e., a pore. When there are many such cubes, a large porous structure is created. I decided to go further and introduced functional compounds – phosphazenes. This direction is actively developing at the Department of Scientific and Technological Projects of Mendeleev University of Chemical Technology of Russia. As it turned out, such compounds have good adsorption activity with respect to heavy metals. Later we used similar approaches for the adsorption of dyes, iodine vapors, and carbon dioxide.

And the last area in which I was involved is devoted to the use of porous materials as catalysts. The larger the surface area, the more efficiently various reactions can occur on this surface. In addition, there is another useful property. For example, heterogeneous catalysts do not dissolve. After processing, with the help of conventional filtering, we can reuse them in the next operation.

− As a rule, the polymer is produced in powder form. You won’t even know that it is porous, because the pores are very small – only a few nanometers. Therefore, specialists use electron microscopy as one of the main methods in the study of such polymers.

− What elements are they based on?

− In my work, I used the so-called organoelement compounds containing silicon, phosphorus, nitrogen, and carbon. This field is located at the junction of organic and inorganic chemistry. Such polymers have the advantages of both organic and inorganic compounds. They have high functionality, and they can be modified for certain applications. In addition, such polymers are resistant to high temperatures and various effects of chemical reagents.

− What are the specifics of their production?

− The process of laboratory preparation is quite simple. The ingredients are placed in a flask with a magnetic stirrer. Then a solvent and catalyst are added, and then the mixture is heated for several hours, and sometimes for days. At the output, we get a solution in which a porous or cross-linked polymer is formed – that is, one very large molecule – in the form of powder. Then the already obtained powder from the flask is filtered, washed, and dried. And the finished product is obtained.

− You have gained work experience in China. How different are the approaches in organizing the scientific field? What can be brought to the domestic practice?

− I must say that before that I worked in research institutes, including academic ones, where the main activity was science, although there were some students, too. I had no work experience in educational institutions. Therefore, when I came to China, I was pleasantly surprised that starting from the third year, students are already involved in scientific work. And a year later, they start working independently.

Now I work at the MUCTR, and I notice that the system is the same. They try to involve students as early as possible, so that they, as young scientists, quickly learn everything, including how to work independently.

What is definitely worth learning from our Chinese colleagues is how the bureaucratic formalities are dealt with. One could imagine that the bureaucracy in China is worse than in our country, but at the same time, the availability of the necessary materials and reagents is several times higher. It is enough to write a small request, and in a week the necessary reagent will be delivered to the laboratory. In Russia, you can’t even issue procurement papers in a week.

What could they learn from us? I’m convinced that the main advantage of Russia is the preservation of high-quality fundamental education.

− Tell us about the unsolved problems in the field of porous polymers. Are there any challenges that interfere with widespread use?

− To begin with, one of the types of polymers has recently become very popular. In Russian-language literature, such polymers are known as covalent organic frameworks. These are porous polymers of a high degree of crystallinity, that is, they are very well-ordered – literally “brick to brick.” And the polymers that I used to obtain in China together with my colleagues were amorphous, with a very disordered structure. Simply put, all the fragments were simply concatenated randomly. The structure of covalent organic frameworks, on the contrary, is always smooth. Therefore, the biggest difficulty is obtaining them. In general, obtaining a large crystal is not an easy task for inorganic chemistry. And to get a crystal based on organic compounds, it takes from 3 to 7 days and compliance with certain conditions. Therefore, now we face two main tasks: to learn how to create large porous crystals and obtain them as quickly as possible.

− What will this bring to science and industry? Better materials?

− Among other. For example, today some highly crystalline compounds are used in laser and sensor installations. They can also be used in various gas separation processes, for example, when it is necessary to separate nitrogen from oxygen or other gases in the air.

− You have both international scientific experience and experience working in a domestic structure. What would be your advice to young students who are just starting their career path in science? What should they pay attention to and how can they achieve high results?

− I would say that first of all, it is necessary to learn English. Today, this is the main thing since good-quality scientific literature is published in this language. Same for many textbooks. It’s an objective fact: the international language is English, and therefore all scientists tend to publish the results of their work in English first. By the way, just like in Russia, this is also a big problem in China. The Chinese speak English very poorly. And at the same time, they don’t want to learn it. We have the same issue.

But without the knowledge of a language, you will not be able to properly participate in any international conference, you will not write a good article and will not publish it in an international journal. Therefore, the primary task is to learn English. After that, everything will work out well.

− What is chemistry for you?

− I've been studying chemistry since the sixth grade. Therefore, for me, chemistry is, one could say, almost my entire conscious life. Chemistry has always attracted me, so I continued to study it at university, and then in graduate school. I like to conduct new experiments. I can sit for days in search of new scientific articles, read them. And there are a billion of ideas in my mind that urgently need to be transferred to paper; otherwise, everything will be forgotten and will disappear.

− What is the main beauty of chemistry? Why did it attract you so much and continues inspiring you to this day?

− Thanks to chemistry, you can create something new, unique, and most importantly, useful. And you can literally see the result of your work, feel it with your hands. Chemistry gives you the opportunity to create something useful not in words, but in deeds. 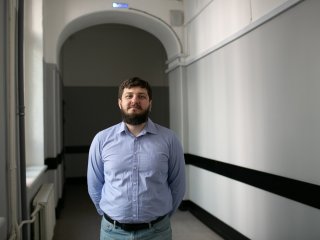 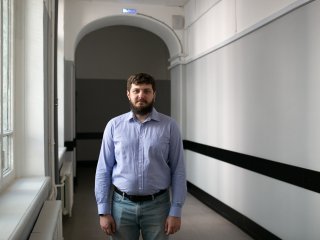 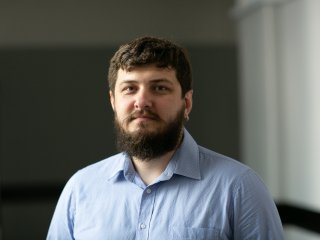 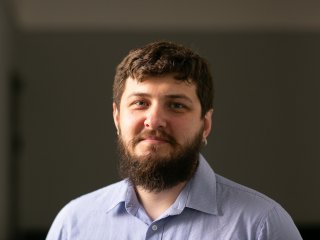 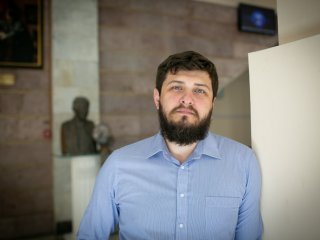 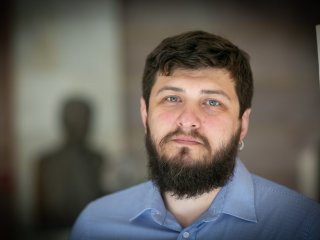 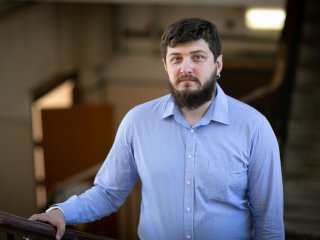 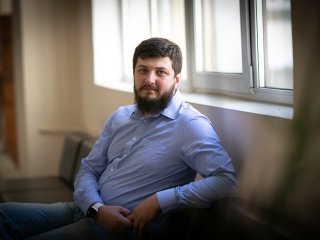 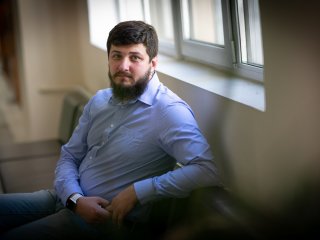 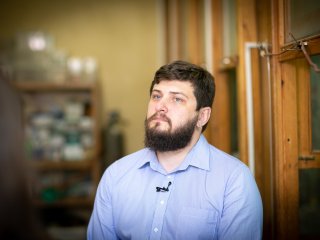 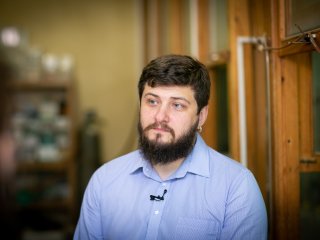 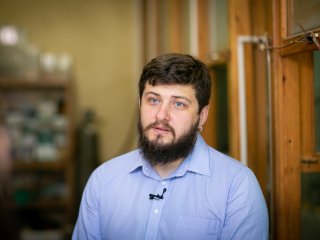 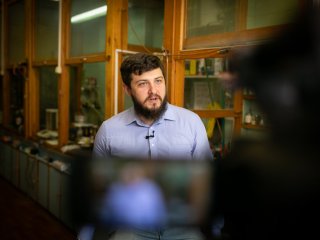 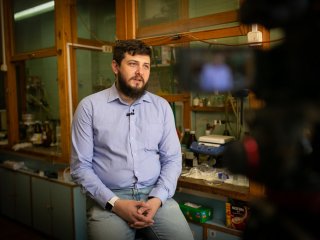 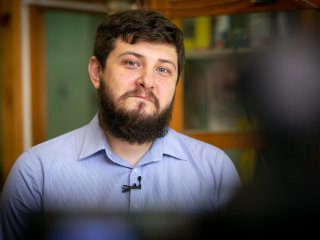 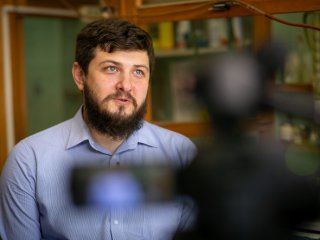 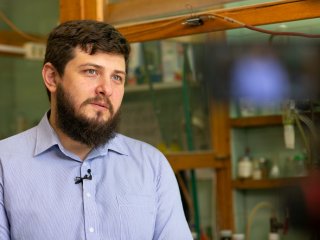