On February 22, 2022, an online meeting of the Presidium of the Russian Academy of Sciences was held. Main topic: Development of astrophysical research in Russia: ground and space segment.

Space research is the topic of the report of the Deputy Chairman of the RAS Council on Space, Academician Lev Matveevich Zelyony.

On the activities of the RAS Council on Innovative Problems of Transport and Logistics. Academician Vladimir Ivanovich Kolesnikov.

On the expert commissions of the sections of the RAS branches in the fields and directions of science. RAS Corresponding Member Dmitry Valerevich Bisikalo.

10.02 RAS Vice President Yuri Balega talks about the agenda for the meeting.

10.07 Yuri Balega makes a report on the state and prospects for the development of astrophysical research in Russia.

10.09 Yuri Balega: “We live in the era of the greatest discoveries in the field of astrophysics.”

10.11 Yuri Balega talks about the most distant galaxies of the visible part of the universe.

10.13 The speaker talks about the detection of gravitational waves from new space sources.

10.19 Yuri Balega talks about a new discovery: the image of a supermassive black hole built by the Event Horizon Telescope.

10.21 The speaker talks about modern tools that make it possible to make space discoveries. Among them are giant telescopes.

10.27 RAS Vice President talks about the expanding Universe of A. Friedman, Sakharov oscillations, and the Sunyaev-Zeldovich effect.

10.31 The speaker explains the Shakura-Sunyaev disk accretion theory and notes: “This is the most cited article in the world in the field of theoretical astrophysics.”

10.33 Yuri Balega talks about the inflation of the early universe.

10.35 Speaker: “There are 1,500 astronomers in our country, 5 specialized observatories, 10 RAS institutions are engaged in astronomical research, about 12 universities have institutes or departments of astronomy.”

10.38 Speaker on priority tasks in the field of astrophysics: “This is, first of all, the early universe, that is, the most distant objects.”

10.40 One of the main tasks of the current decade is to join the European Southern Observatory (ESO).

10.45 Lev Zelyony: “Space research in Russia is mainly carried out within the framework of the Federal Space Program.”

10.47 The Speaker talks about the difficulties with the financing of fundamental space research, which left many projects postponed.

10.50 Lev Zelyony: “The astrophysical program in our country is being carried out very decently.”

10.51 The first Russian spacecraft of the Spektr series was launched in 2011 and operated for 8 years.

10.52 “We are preparing for the launch of Spektr-UV; at the end of the decade, we hope the fourth Spektr will be launched – this is a complex and interesting project.”

10.55 The speaker talks about the first survey of the sky by the eROSITA telescope.

10.58 “The UV range is a unique source of astrophysical information. A lot of additional information can be obtained through exoplanet research.”

11.00 Lev Zelyony talks about the directions and methods of laboratory astrophysical experiments.

11.01 “In Russia, a significant place has always been occupied by the program of biomedical research. … Our scientists are among the leaders in world science.”

11.04 “EXOMARS – the main project of the decade.” The speaker talks about the scientific tasks of the equipment complex.

11.06 “It will be difficult for Russia to explore space in isolation.”

11.07 The speaker talks about the reserves of water ice.

11.09 “It is necessary to master international cooperation.”

11.10 Anatoly Petrukovich, Director of the SRI of the Russian Academy of Sciences, RAS Corresponding Member, delivers his report.

11.11 The speaker talks about the applied element in heliogeophysics.

11.12 “The applied importance of space sciences should be emphasized.”

11.14 “The modern history of Russian heliophysics began in 1957 with the International Heliophysical Year.”

11.17 “It is necessary to develop a heliophysics strategy.”

11.19 “The result of the strategy, in addition to scientific and applied achievements, should be a single complex of space and ground-based observation facilities.”

11.21 “The Arctic is Russia’s priority zone. This is the place where the effects of space weather are most pronounced.”

11.22 “Heliophysical research and monitoring is a complex and resource-intensive direction.”

11.26 The speaker talks about the tasks of millimeter and submillimeter astronomy.

11.28 “Studies of the spectrum of interstellar clouds are of great interest, we’re actively engaged in this now.”

11.29 “The study of star formation processes is one of the main tasks of millimeter astronomy.”

11.31 “One of the outstanding achievements of recent times is obtaining an image of the “shadow” of a supermassive black hole in the M87 galaxy.

11.32 Igor Zinchenko talks about the Large Millimeter Telescope in Mexico.

11.34 There are several scientific groups in Russia conducting astrophysical research on short millimeter and submillimeter waves.

11.39 “Registration methods in the case of neutrinos are extremely complex and non-trivial, … since it is very difficult to register, … but this is a plus from the point of view of astronomy because neutrinos bring information from inaccessible stars, for example, the bowels of stars.”

11.41 The speaker talks about the methods of studying solar neutrinos.

11.45 “Due to the large number of neutrinos being born on Earth or in its atmosphere, the isolation of events from astrophysical sources in itself is a serious problem.”

11.47 “Neutrino telescopes are not desktop equipment, they are megascience class installations.”

11.51 The speaker talks about the first successful detection of sources by EM and gravitational-wave channel.

11.53 “Training of highly qualified specialists in interdisciplinary fields of astronomy and space research is required.”

11.55 Konstantin Postnov talks about the problems of astronomical education and improving the level of training of specialists.

11.58 Head of the High Energy Astrophysics Laboratory of the Russian Academy of Sciences Andrey Bykov.

11.59 “Experiments on gamma-ray astronomy are actively being developed in Russia.”

12.00 “Gamma-ray bursts are the most powerful explosions in the universe.”

12.02 “The purpose of the work at the Institute of Physics of the Russian Academy of Sciences and the universities of Saint Petersburg is the modeling of physical processes in relativistic transients.”

12.06 The speaker talks about the research of the microwave astroclimate.

12.08 “There is not a single instrument working on short millimeters and submilimeters in Russia today,” it is necessary to “find resources to correct this glaring misunderstanding.”

12.10 Yuri Balega: “Let’s consider our discussion over.” The participants proceed to discuss comments on the draft resolution.

12.12 Academician Valery Rubakov: “I have a proposal to supplement the ruling part with a clause on neutrino astronomy; namely, to consider it necessary to develop neutrino astronomy in Russia, including within the framework of international cooperation.”

12.15 Academician Lev Zelyony: “If the preparation of students in astronomy lags behind, there will be no good students of specialized universities. … I would suggest strengthening the school curriculum in astronomy.”

12.17 Yuri Balega: “If there are no objections, we believe that the decision of the Presidium has been made on the first issue. … The next issue is about the activities of the Russian Academy of Sciences on innovative problems of transport and logistics.”

12.22 “We are taking the initiative to create a new section – Technogenic Safety and Ecology of Transport.”

12.25 Yuri Balega: “If there are no objections, we consider the draft resolution adopted.”

12.28 Dmitry Bisikalo talks about the expert commissions of the sections of the branches of the Russian Academy of Sciences in the fields and directions of science.

12.32 Alexei Khokhlov, Vice President of the Russian Academy of Sciences.

12.33 Alexei Khokhlov talks about the approval of candidates for chief editors of academic journals.

12.38 The closed part of the meeting begins.

The broadcast is over, thank you for being with us! 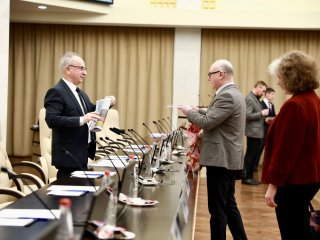 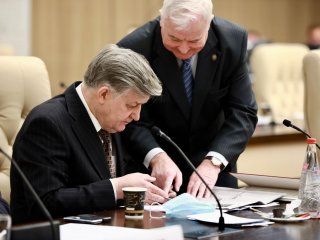 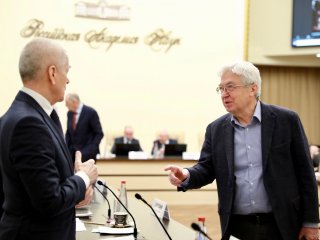 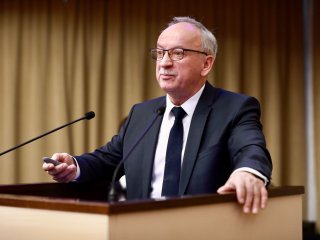 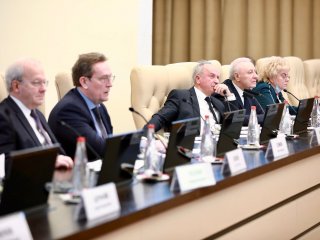 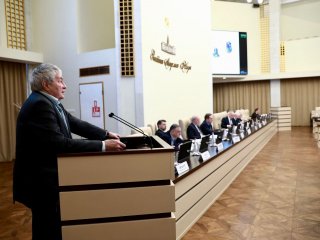