Louis Braille. January 4, 1809 – January 6, 1852. French visual impairment specialist. The inventor of a system of reading and writing for use by the blind.

1. Leo Tolstoy’s War and Peace is an extensive narrative of four volumes in the writer’s collected works. However, there are people among us who have read War and Peace not in four, but in as many as twenty-nine volumes. Such is a volume of Tolstoy’s novel printed in a typeface created by the French educator and visual impairment specialist Louis Braille.

2. Louis Braille was born in the small town of Coupvray near Paris in January 1809. The difficult fate of Louis Braille was predetermined by the profession of his father, a saddler. At his toddler age, Louis liked to play with scraps of leather in his father’s workshop. And once he grabbed an awl and... stabbed himself in one of his eyes. The infection spread in the other eye and by the age of five the boy completely lost sight.

3. Smart and lively, with a bright mind and an excellent memory, little Louis learned to read despite the hardships. His father taught him to read, and the letters were represented by nails hammered into a board.

4. The boy went to a rural school, where he quickly overtook his sighted classmates.

5. At the age of ten, Louis Braille was permitted to attend the Royal Institute for Blind Youth in Paris. There Louis learned to play the piano and organ.

6. The Royal Institute for Blind Youth taught the Valentin Haüy system. Haüy was an educator who invented an embossed font for the blind made of raised imprints of Latin letters.

7. Louis read all fourteen books that were available at school, and was unhappy: it took a few seconds to trace fingers over each letter. By the end of a sentence, the reader could forget what happened at the beginning of the sentence.

8. Braille realized that it was necessary to invent other letters that would allow the blind to read easily and quickly. Louis was lucky enough as the blind students were introduced to the typeface invented by Captain Charles Barbier de la Serre of the French Army, by order of Napoleon. The emperor wanted a system for soldiers to read reports at night on the battlefield. Barbier’s “night writing” was a code of embossed dots and dashes that could be read with fingers without using light.

9. The young Louis was not absolutely happy about the Barbier system either. Holes punched in a cardboard were easier to read than the Haüy font, but this writing was cumbersome and one page could fit only one or two sentences, which was quite satisfactory for the military, but not good for book publishing.

10. The boy experimented for five years; his fellow countrymen often met him sitting in a meadow and thoughtfully piercing a piece of paper.

11. The solution found by Braille was both simple and elegant: a cell of two vertical rows of three raised dots each. This gave sixty-three combinations, which made it possible to represent letters, numbers and musical notation signs with symbols.

12. A talented musician himself and later a teacher of music for the blind and organist in a number of Parisian churches, Louis specifically insisted on musical notation.

13. At the age of seventeen, Louis began teaching in the younger groups of his alma mater, and two years later he taught students every discipline available at the institute: arithmetic, grammar, geography, music. He was infinitely kind, and his students adored him.

14. This is not to say that Braille was instantly recognized by everyone. Sighted teachers opposed, Barbier de la Serre intrigued. But the History of France was printed in braille in 1837.

15. In his youth, Louis Braille contracted tuberculosis. The disease promised a short life, and it kept the promise.

16. Louis Braille spent only a small part of his salary on his own needs. The lion’s share went to buying books for poor students.

17. They say that after death, friends found a box in Braille’s personal belongings with a note: “Burn without opening.” Friends nevertheless opened the box and found hundreds of IOUs: it turned out that Braille generously lent money. Friends did Louis’s will: the box was burned along with the contents.

18. Other inventors tried to improve and revise braille, but soon found that it was the best.

19. Braille books are fifteen times thicker than regular books and the reading process is three times longer, but this is quite an affordable price for an open world.

20. The world appreciated the invention of Braille: on the centenary of his death, he was ranked among the French geniuses and his remains were moved to the Panthéon in Paris. Eyewitnesses testify: traces of many hands can be seen on a tablet near his tombstone.

21. After the death of Braille, the American educator William Bell Wait created his own writing system for the blind, but the “war of dots” was eventually won by the long-deceased Braille. 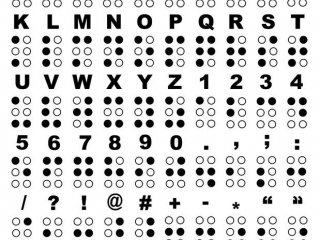